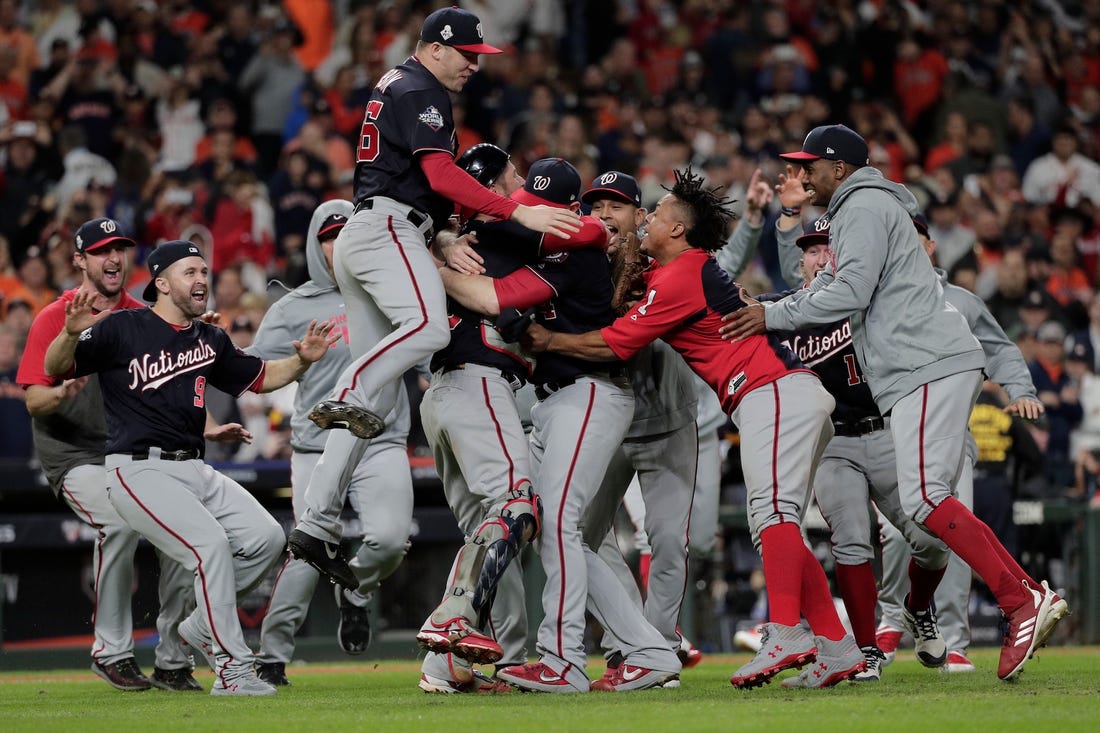 Last Wednesday, on October 30, the Washington Nationals won the World Series by defeating the Houston Astros 6-2 in Game 7. But the home run that helped win the World Series—”The one that gave the Nationals the lead in Game 7 of their eventual 6-2 win over the Astros”—wasn’t “the greatest moment” of Howie Kendrick’s career, reports Emma Baccellieri of Sports Illustrated.

That would be a different home run from this October, he decided—his extra-inning grand slam from Game 5 of the National League Division Series.

“We wouldn’t be here without that,” he grinned, standing in the plastic-covered clubhouse, his teammates’ empty beer bottles and champagne corks at his feet.

It may seem improbable that a home run like that can be anything other than the biggest moment of any career. But it is improbable for a team to be forced into five elimination games and win them all. And for a team to win four road games in the World Series. And for a team to start the season 19-31 and make it all the way to the end of October. It’s improbable for a wild-card team to take down a 107-win juggernaut that had previously been declared one of the best in the history of MLB. Yet the Nationals did all of this. They had so many wild come-from-behind moments that the go-ahead home run from Game 7 of the World Series could semi-reasonably be described as something other than the team’s most crucial one of the month. They did stuff that baseball’s never seen before. And they did it all in the frenetic, inspired, nerve-racking fashion that’s come to define the team.

The triumphant season, full of unexpected swerves—what NBC News calls “a Cinderella season”—has been summarized by Adam Augustyn in the Encyclopedia Britannica entry for the Nationals.

[T]he Nationals’ strong starting pitching (led by Strasburg and Max Scherzer) and hitting led the team back to the postseason in 2019. There Washington exorcised years of playoff failures by defeating the two-time defending NL champion Los Angeles Dodgers in the division series for the franchise’s first victory of a postseason series. The Nationals followed that by sweeping the Cardinals in the NL Championship Series to advance to the team’s first appearance in the World Series. The Nationals continued their improbable playoff run by winning all four of their road games (while losing their three home games) in the World Series to capture the team’s first championship.

The formula of losing three home games and winning four away games is not exactly standard. But, hey, whatever works….

The Washington Nationals do not currently have a knuckleball pitcher. But there are at least one or two knuckleball connections to the team.

It would be unfair to mention that on September 21, 2017, in one of his last games for the Atlanta Braves and of his MLB career, knuckleball pitcher R.A. Dickey led the Braves to a 3-2 victory over the Nationals. So let’s not mention it (except perhaps the USA Today headline, “Nationals baffled by Dickey’s knuckleball in Braves’ 3-2 win”). We’ll mention instead that the Nationals had something to do with pitcher J.D. Martin’s turn to the knuckleball, as reported in April by The Daily Independent (“Burroughs alum refuses to ‘knuckle’ under”).

The “secret sauce” that is prolonging his career: the knuckleball. A pitch that is becoming increasingly rare in modern-day baseball due to its slow motion—in a time when scouts are looking for fireballers—it has also helped pitchers rebound due to the lack of stress on the arm required to throw it.

In 2011, the Washington Nationals’ pitching coordinator approached Martin about converting to a knuckleball. At the time, he didn’t think about it too much; he kept that thought in the back of his mind for when he’s older.

“I called him five years later,” and asked if the coaching staff was still interested in Martin throwing the knuckleball, he said. Once they affirmed, he continued to pitch for them and has continued to develop the pitch over time.

Mastering the knuckleball is still “a work in progress,” says Martin, who joined the Los Angeles Dodgers organization in February 2019. To improve his control over the pitch, he has been working with former knuckleball pitcher Charlie Hough.

“[M]y old mechanics start trying to revert back sometimes. I haven’t really thrown a knuckleball that long yet, so I have to be kind of patient with it… The timing is so crucial to get a perfect knuckleball that it’s very hard to stay consistent with it.

“Just kill the spin and get it in the zone,” is how Martin summarizes what he needs to do.